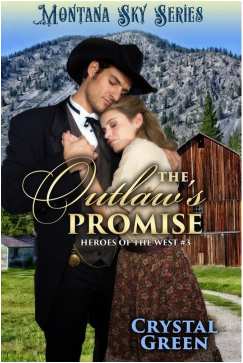 A cowboy in the throes of an unrequited love…

Solomon Ross had been running from the law for years until he found a home on the Golden C. But when tragedy strikes, he has to disappear again, always an outlaw, always a loner…

But the woman he secretly loves, Etta Horner, needs him back at the ranch, and the promise he makes to her will either redeem him…or ruin him altogether.

This sweet 50,000 word novel takes place during the time of Debra Holland’s BENEATH MONTANA’S SKY.


Excerpt from The Outlaw's Promise, exclusively on Amazon!

“Surely you can at least give me a dance, Etta,” he said. “That’s all I’m asking for before I go for good.”

Her entire body cried yes! even as her common sense yelled no! If anyone saw them up here, away from the rest of the crowd, in their own little world, they would assume…

What? Who would see them anyway when everyone was so intent upon the festivities? Also, it was merely a dance, not a commitment, and it sounded as if Solomon would leave afterward. She even didn’t mind so much that she might cause a stir as a new widow, but who was she fooling? She’d already made an appearance in the wedding, and no one had been scandalized.

So she allowed Solomon to rest his hand on her hip. When she didn’t refuse him, he gently held her other hand in his. Gradually, she came to place her own hand on his arm. Underneath his shirt, she felt solid muscle.

They stood there while the music played, not moving, as if neither of them knew what came next.

How could she possibly know?

Finally, Solomon swayed slightly, and she followed him.

“I have no inkling how to do that, anyway.”

She was so close to his chest that it seemed as if she could feel the vibration of his every word, the thud of his every heartbeat—or maybe that was her own. She looked up to find him watching her.

Now her heart nearly beat its way out of her. Her former husband had never given her this crazy desire, this urge to press herself against him no matter what anyone else thought and to let the dance lead where it may.

But she kept a proper space between Solomon and her as they circled oh-so slowly.

Their silence gnawed at her, and she was compelled to say something. “It’s been a long time since I’ve danced.”

He didn’t respond. He only watched her with every emotion she’d ever guessed he had for her there in his gaze, bare and revealed.
She wanted to run, wanted to stay, didn’t know what she wanted…

“Etta,” he said, “I robbed you of something, and I don’t want you to suffer on account of that.”

“I’m not suffering.” He had to know that his taking care of Garth had been a blessing. It was this—being in his arms and knowing nothing could come of it—that was making her suffer.

“What I mean to say is that I’m responsible for what I did, and I don’t take responsibility lightly. I’m a loyal man, Etta, and now that I’m back here, I realize what my purpose truly is.”

His grip on her tightened, not enough to hurt her, but enough so that she knew something big was coming.

“Solomon, you don’t owe me anything.”

“But I do.” He stopped moving, merely looking down at her, resolve in his brown gaze. “I owe you more than I realized, and I’m here to promise you that I’ll pay it back to you once you’re ready.”

Now her pulse was chopping through her, mincing his words, although she could hear every one of them.

Don’t say it, she thought.

“I promise to stand by you, to give you what you need. You just tell me when, Etta, and we’ll make arrangements.”

His stiff, practical words were like boards set between them. If Etta had expected romance, he had just built a wall around the very notion.

But romance wasn’t something she deserved, anyway.
​
And maybe she never had.
You can read Debra Holland's wonderful Montana Sky books themselves, or check out the many fantastic stories in her Kindle Worlds!​http://www.debraholland.com/kindle-worlds.html
Powered by