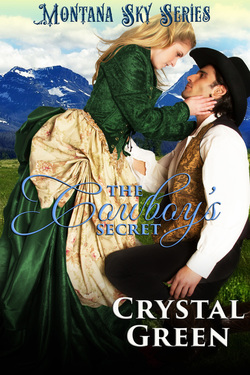 Silent, strong Boone Ross has a secret, and after beautiful widow Lorena Bell arrives at the ranch where he works, that secret only grows, threatening to consume them both.

The past has always been a step behind Boone, but now it’s coming closer and closer. Is it time to run again, or will he stay and fight for a love that can bring him out of his self-imposed darkness?

This sweet 28,000 word novella takes place during Debra Holland’s BENEATH MONTANA’S SKY, while John Carter is back east choosing a bride.
​
Excerpt from The Cowboy's Secret


As Boone controlled the reins to the horses that drew the buckboard wagon, he did his best to ignore the fact that Mrs. Bell was seated right next to him, her hands folded in the lap of her calico skirt covered by a long coat, as prim as a queen under her straw hat.

Around them, prairie grass ruffled like silk in the wind. Snow still clung to the ground under the shade of the trees, and it’d persuaded him to wear his own canvas duster as a barrier against the spring elements. Too bad he didn’t have more protection from that lilac scent that wafted off Mrs. Bell, making him lean closer to her every so often befor﻿e he caught himself and straightened up.

At least it was far easier to keep himself in check every time he reminded himself that Garth Horner was on his horse, riding a few feet away from the wagon. The man had hardly cast a look over to them the entire time, though, and, for all intents and purposes, that just about left Boone alone with the beautiful widow.

As the wheels hit a rut, Mrs. Bell bumped into Boone’s shoulder, and he swore he heard her hitch in a breath. The tiny, winged sound tightened his gut, as well as his hands on the reins.

Before she could answer, Garth chuffed. “She’s hardy enough. But not so much that she doesn’t need an escort to town.”

Her clothing rustled as she glanced at Garth. Like the grass around them, awareness waved through Boone’s chest.

“In general,” she said in that smooth manner of hers, “I hardly need escorts. It seems that, out here, there’s a different book of etiquette to follow.” She laughed softly. “Or perhaps everyone threw away most of the book.”

Even though her laughter was still trilling through Boone, he kept his mouth clamped shut. Engaging with her would only make this trip longer, and Lord knew, it was long enough with him trying to resist even a glance in her direction.

She was the prettiest thing he’d ever seen here or back in Kansas, and she was above a lowlife like him—that was clear from the way she seemed to know her manners and from how soft and creamy her skin was. He didn’t know how long that softness was going to last out here, but for now…?

He blew out a breath and flicked the reins. Just keep on driving, Boone.

Garth didn’t let the conversation run out. “As long as you’re under my roof, you’ll always be escorted. Last thing I need is all the hounds around the area sniffing about and taking advantage of you, although, someday, God willing, you’ll be married off.”

“Why, Garth, I appreciate the concern. But, rest assured, I won’t encourage the attention. One marriage was quite enough.”

He urged his appaloosa into a trot, then slowed down his mount a hundred feet ahead of them, giving them his back.

Though Boone appreciated the lack of chatter, he thought it rude treatment toward Mrs. Bell.

He slid a reluctant glance to her to see that she wasn’t put out, and she didn’t seem to be—not with her face lifted to the wide blue sky and the faint smile on her face.

“I knew there was a way to nudge him off,” she said quietly, and he wasn’t sure if it was to herself or to him.

And they’d been doing so well with the silence. He only flicked the reins again, in more of a hurry than ever to get to town. Even so, thoughts ate at him.

What had Mrs. Bell’s marriage been like, and had she been happy? Nowadays, did she ever wonder if she should let another man in…?

She was looking at him again. He knew this because he could see her head swivel toward him out of the corner of his eye. But that wasn’t the only way he knew—that intense yearning was back, twisting in his belly.

Her voice was a light whisper. “You might have noticed that Garth is a tad prickly, at least when it comes to family.”

All right, Boone had options here: He could grunt. He could make no noise altogether. Or he could answer her. Why did she and her son have to be the only ones within thousands of miles to put him in this position?

“I suppose Garth is that,” he said noncommittally.

She paused, then seemed to make some sort of decision to carry on. “My son tells me that he informed you all about his father and why we ended up in Montana Territory.”

“He didn’t tell me all that much.”

“He seemed to think it was a great amount.” She smiled, and he could feel it all over him. “I meant what I said the other day, Mr. Ross. Thank you for lending him an ear. His uncle Garth isn’t very…Well, I get the feeling that he believes children are merely around to do chores and keep their tongues.”

“That doesn’t bode well for the future of the Horner line.”

She laughed again—and it was because of his accidental attempt at a joke. His skin tingled, as if with a fever.

What was it about the Bells that drew him out like this, encouraging jokes and chatter out of him?

Boone couldn’t begin to guess, but as long as he could keep to himself when they got back to the ranch, he could tolerate a day of verbal indulgence.

She turned so that she was fully facing him, and it was as if his skin had gone from tingling to red-hot.

“Garth,” she whispered again, “has been grousing because of the hunting you men will have to do for Mr. Stanley’s reception. And the fishing. But all that meat for the guests won’t come out of nowhere.”

“I’m sure that, deep down, he doesn’t mind, either. Oh, he complains, but he’s truly a hard worker.”

“He works pretty hard at some things.” Like emptying that flask of whiskey Boone had spotted him with a time or two.

At a gust of wind, Mrs. Bell rested a hand on the top of her head to keep her hat stable. “So tell me. I hear there are certain entertainments in Sweetwater Springs…besides shopping, I mean.”

Were her cheeks flushing? Was she wondering if he and Garth were going to frequent the saloons in town while she saw to her business? Boone wasn’t exactly a stranger to those activities—in fact, he was planning a how-do-you-do in a saloon today after delivering the invitations. But Mrs. Bell’s maybe-question did something to him. He didn’t know exactly what it was, but it involved more punches to his gut and heat on his skin.

“I suppose Sweetwater Springs has something for everyone,” he said. “I’ll be concentrating on the invitations to this gathering, though.”

She turned to the front again, giving him a great measure of relief. “Well, no matter. I’m only looking forward to making Mr. Stanley’s reception the best it can be. He’s so excited about his bride.”

A smile crept onto Boone’s face. “Yes, he is.” When Jasper had announced his news to the hands, they’d slapped his back and broken open their own liquor supply for him. It hadn’t taken long to get their boss to the point where he needed help walking back to the main house.

Tenderfoot, he thought. But one he could respect, seeing as Jasper had hired him on when the man was building the ranch. The spread was small but efficient, though Boone wasn’t sure how it turned enough profit to keep Jasper in fancy waistcoats. His inheritance probably helped.

He and Mrs. Bell had fallen to silence again, and now Boone realized that was actually worse than having to talk. Silence made him dizzy with her scent. Silence made him anticipate another bump that would send her arm against his again, allowing him to imagine that he could feel her warmth through all the layers of their clothing.

The silence continued as they rode on, with him feeling her gaze come back to him every so often…and him trying like the dickens never to return it because men like him didn’t settle down.

Not when there’d always be something riding his back...
​
Buy The Cowboy's Secret for Your Kindle!
Join Crystal's Newsletter!
Powered by